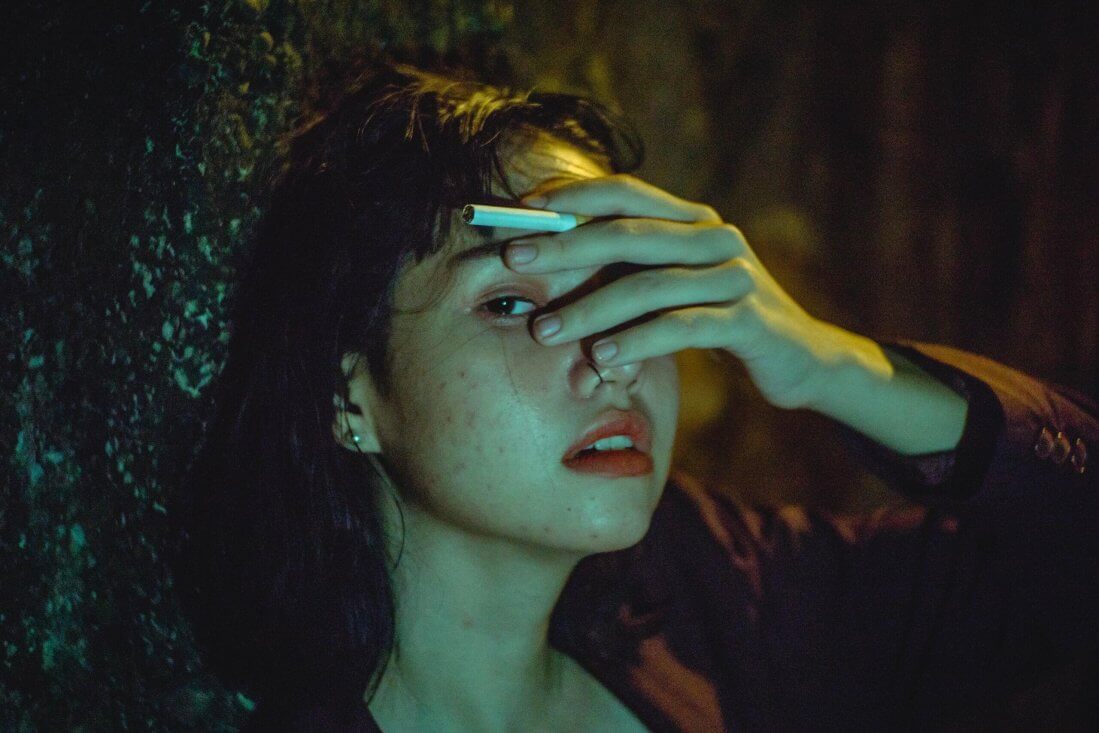 Smoking and eating meat. What might sound like an odd comparison – and surely, there are many differences – unfortunately is more likely than you think. I am just about to show you that there are many similarities.
The trend towards vegan lifestyle and plant-based eating is stronger than ever and there are more and more plant-based options in the supermarkets across the world. Consumers are better informed, the food industry is more under scrutiny and it is easier to eat healthy and make better decisions than ever before. That gives us the reason to ask why are we still so far from dealing with meat consumption? Why is meat consumption still an issue?
Just as eating meat, smoking has been widely accepted for decades. But before smoking became a common habit of many, men and women alike, it was mostly used for spiritual rituals and by some chosen exponents of society. Just as meat, it was neither easily available for the average person nor considered as something necessary for daily life. Pretty much the same reasons why  animal products traditionally only provided 5-10% of daily calories. It was expensive and difficult to come by and that for reserved for special occasions.

Quite early, in the 18th century the first skeptics started talking about the dangers of smoking. Unfortunately these early warnings came at the same time of the start of the mass production of cheap cigarettes. During the world wars, cigarettes were distributed to troops as boosting treats. Only since the second part of the 20th century, when the first lawsuits fought against the industry were successful, did the consumption in Europe and Northern America started to decline. After that the market shifted to the less developed countries where legislation is weak and consumers are less aware of the dangers of smoking. [1]“A Brief History of Smoking” by https://www.cancercouncil.com.au Link

A chart showing the incrementation of death by specific causes due to tobacco use.

After the low consumption of meat and dairy once in a while for hundreds of years, the end of WWII brought rapid growth in meat production around the world. Brazil, the US and China have been and still are the biggest producers of cattle, pigs and poultry. Of course, together with this also the production of other animal-derived products (milk, eggs, fish etc.) has been increasing constantly. 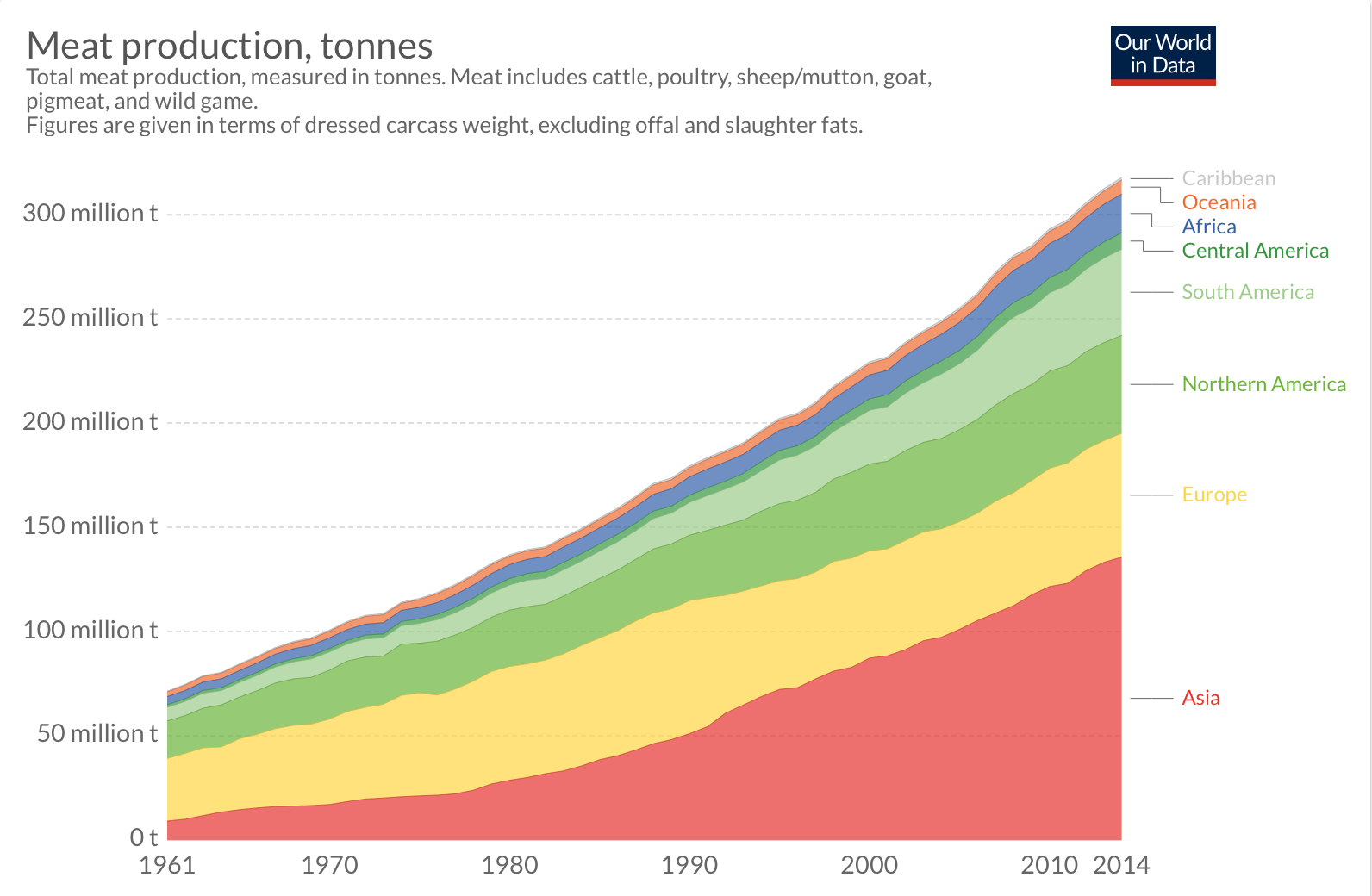 source: https://ourworldindata.org/meat-and-seafood-production-consumption
As we know, but not everybody is ready to accept as a truth, all has been accompanied by global warming and an increase in affluence diseases like Type 2 Diabetes, Cardiovascular diseases (heart attack, stroke…) and cancers of all types. It is a well known fact that the IARC/WHO classified processed meat as a Group 1 carcinogen, the same category as tobacco smoking and asbestos (learn more about this here). Looking into the exact links between health issues and consuming animal products will be the topic of other articles I am about to write on this blog, but it is for sure not a coincidence that we see increase in both mass meat production and certain health issues.
Interestingly, while in the 90’s people started to get educated about the dangers of tobacco by more and more films and commercials, and bans started to rise, not allowing smoking in certain places, meat-eating is still, to this day, very far from this. To our best knowledge, both smoking and eating meat cause cancer and stiffening of arteries, and again in both cases people first find it hard to believe these health problems are caused by their behaviour. Both habits are addictive and socially recognised, and just like smoking was once funded indirectly by the government, meat consumption is, too. 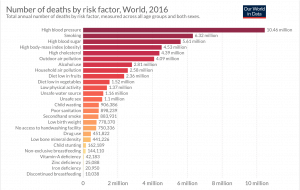 source: https://ourworldindata.org/causes-of-death
Once the health threats of smoking started to get some media, there has been many attempts of reducing the number of smokers, with good results in the developed world. In an interview with vegan magazine Viva! life [2]Viva!life, Kerry McCarthy, shadow Environment Secretary in the UK, said: “I really believe that meat should be treated in exactly the same way as tobacco, with public campaigns to stop people eating it.”  Former UN Climate Chief even said that meat eaters should be banished, and treated “the same way that smokers are treated”. [3]http://www.climatedepot.com/2018/12/07/former-un-climate-chief-meat-eaters-should-be-banished-treated-the-same-way-that-smokers-are-treated/ link
Knowing that a certain habit may cause their death or other dreadful diseases seem not to be enough for people starting to think them over. Good examples are drinking, not using the safety belt or texting while driving. All these things had to be prohibited by law to limit their occurrence. When looking for solutions, taxation also comes to mind, as it proved to be effective already. Tobacco, as well as fuel or liquor, is heavily taxed nowadays which makes it more expensive, thus less available for the masses which is – together with other efforts, like bans and campaigns – bringing us back to those times when it was consumed with more moderation.
How effective taxes are in order to modulate a harmful behavior of the population? There are at least three fields in which damaging practices have been successfully targeted with various tax schemes by governments, eventually meat could and should be the fourth. Over 180 countries of the world collect a tax on tobacco, 60 have a carbon tax scheme, and in at least 25 countries there is a tax on sugar, not mentioning the very many countries taxing alcohol. ( this report)
But would introducing a meat tax boost inequalities between rich and poor? Josef Schmidhuber, deputy director of the trade and markets division at the Food and Agriculture Organization (FAO), told Futurism.“If you have a beef tax, who will you tax out of the market? Those who are poorer,” explained Schmidhuber. “And that’s a bad idea, because you penalize those who need to increase their meat consumption. We call this model ‘regressive tax.”
Contrary to this FAO speakers position there are many hints that a more plant-based diet would actually help secure food supply among poorer, making them healthier and making basic food crops better accessible if they are not used up to feed livestock, but fed directly to humans. These questions are not that easy and obvious and surely needs further research.
While we seem to be a million miles away from banning meat-eating and taxing it like tobacco, we should not forget how fast things can change. And the vegan movement is definitely gaining momentum, getting stronger each day, with more and more young people joining in for various reasons, from health to climate change.  According to The New York Times, “an estimated 12% of millennials say they are “faithful vegetarians”, as compared to 4% of Gen-X’ers  and about 1% of baby boomers (link)
If meat-eaters are the next smokers, vegans also have to put themselves at ease with the idea that these unhealthy behaviors cannot be cut 100%, there will always be people remaining on the other side. But when you think about it, not so long ago teachers would smoke in schools everywhere, and you would have to eat your meal in restaurants next to smokers and today all these things seem so extreme. Humankind seem to have a lot of ideas for solving bad habits like smoking. What will we do about the bad habit of over consuming meat? Will a similar rapid shift happen with meat-eating? Let me know what you think in the comments below!
References and further readings:

Next: First things first - What is Keto? → 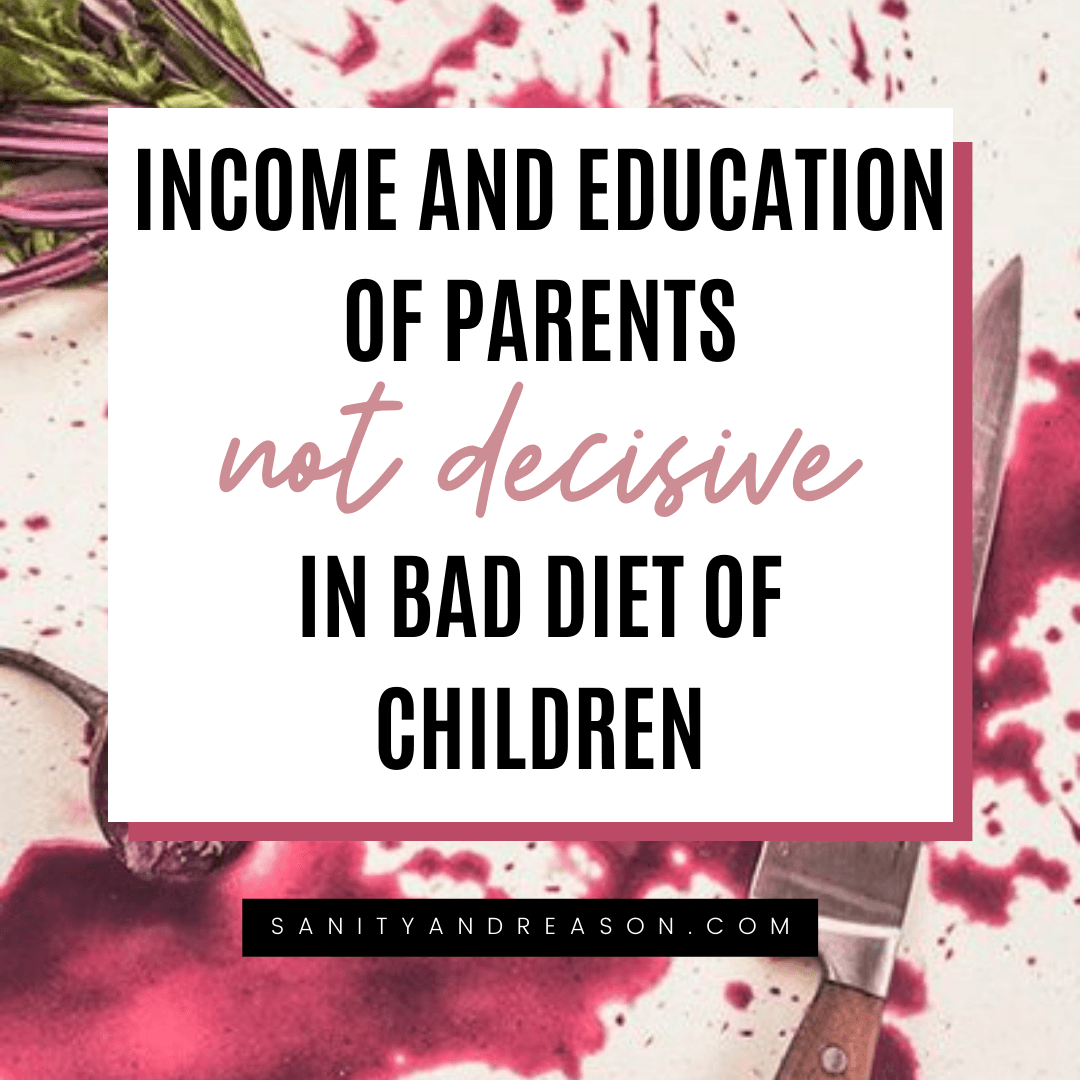